The 4% constant inflation-adjusted rule we posted about in 2009 is the standard advice for setting a retirement portfolio withdrawal rate that is not expected to run out of money, simply because the strategy always worked in the past. But future success depends on the future being like the past. As we recently wrote, there are strong indications that future investment returns will be lower with the consequence that a safe withdrawal rate is closer to 3.5%.

Suppose we don't want to mess around and want an iron-clad guarantee, or as close as is practically achievable, that our portfolio will never run out of money before death while withdrawing the highest amount possible. Step up Barton Waring and Laurence Siegel, whose paper The Only Spending Rule You Will Ever Need, proposes such an approach. The principle under-pinning their proposal makes sense - match assets (portfolio cashflows) with liabilities (spending / withdrawals). Level, guaranteed, lifetime spending with inflation-protected purchasing power most closely matches up with an inflation-indexed annuity, or with a ladder of real return bonds extending out to your expected lifespan.

However, such annuities are difficult if not impossible to find in Canada at the moment (there are annuities which have a set ratcheting increase of 1 / 2 / 3% but none that explicitly adjust to CPI so you have to correctly guess the inflation rate). They also lock in money irreversibly - there's no liquidity or capability to cash out for unexpected needs.

An RRB ladder of Canadian government bonds provides the best possible AAA credit security and direct CPI protection but they are extremely tax inefficient in a non-registered account, As well, the current limited range of issues maturing 2021, 2026, 2031, 2036, 2041, 2044 and 2047 make cash flows lumpy and hard to match with regular even spending. Plus, the furthest maturity is only 33 years away while maximum possible life expectancy is about 40 years, or 105 at age 65, according to the authors. RRB yields are extremely low, at their historic minimums these days, so many investors might still be tempted to keep their portfolio of volatile but higher potential return assets.

Spending must adjust to portfolio fluctuations
For those investors who want to keep their volatile investment portfolio but protect it from exhaustion by respecting the annuity asset-liability matching princple, Waring and Siegel propose doing a simple annual recalculation of how much can be safely withdrawn, which they call annually recalculated virtual annuity or ARVA. Every year after portfolio returns are in, they calculate what income would come from the purchase by the retired investor of a perfectly structured annuity to figure out the maximum withdrawal. The withdrawal fluctuates according to three varying parameters: current average yields on a ladder of RRBs, remaining lifespan aka time in retirement and latest portfolio net balance.

Our Historical Simulation Test - What were amounts and fluctuation of maximum spending?
The authors don't show what would have happened in the past by following their rule. Would the withdrawal fluctuate too widely, especially on the downside? How would the amount compare to the standard 4.0% rate, or 3.5% per today's outlook? For any portfolio size, which factor matters most - interest rate, remaining years? We decided to have a look using available Canadian data. 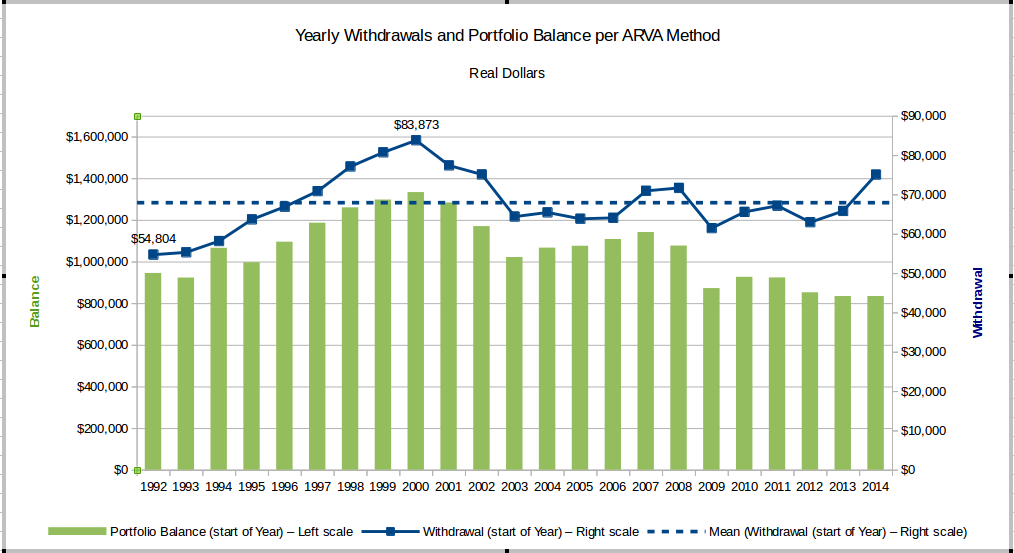 What matters most - Retirement duration, then portfolio value, then RRB yield
To see how the parameters inter-act, we plugged various plausible numbers into the formula. Right now, the yield on a benchmark long term RRB (which currently is the 2041 maturity bond) per the above-linked Bank of Canada webpage is around 0.6%.

The table below shows the sensitivity of the withdrawal amount to changes.

The length of retirement has by far the biggest impact on maximum ARVA withdrawal. Longevity is the most significant risk. Next is the portfolio size, as year to year changes translate directly into proportional changes - up 10% or down 10% means the same increase or reduction in withdrawal, other things being equal. Reducing portfolio volatility greatly helps anyone wanting to use the ARVA method.

Finally, and surprisingly, the change in RRB yield has a relatively minor effect! Note how under today's conditions, the base case million dollar portfolio for a 30 year retirement, which is near life expectancy for a 65-year old, gives a far less generous withdrawal amount than in 1992 - only $36,500 per year i.e. less than the 4% rule and a bit more than the our lower 3.5% market valuation adjusted figure.

We took the same formula to create the chart below showing how various combinations of RRB yield and retirement duration inter-act with the $1 million dollar portfolio. 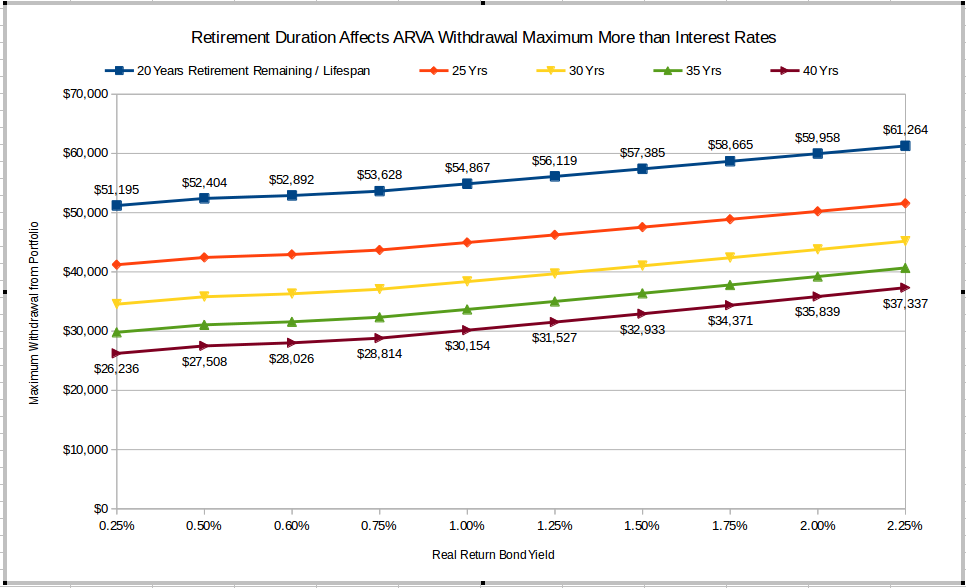 The necessity to make funds last a long time has a huge impact on sustainable withdrawal rates. The difference between 40 and 20 years is much greater than even a several-fold increase in yields, as the contrast between the top and bottom lines vs the left and right edges of the graph show.

Bottom Line: Cautious spending, or the willingness to make fairly substantial spending adjustments year to year are required for the investor looking to use the ARVA method to ensure that his/her portfolio will not expire before he/she does! Building a diversified portfolio that minimizes volatility will directly and proportionally minimize the withdrawal variations.