Different and Better(?) Ways to Invest in the Broad US Equity Market

A couple of previous posts compared total market and S&P 500 ETFs as a way of participating in the broad US equity market. There is yet another way that may be even better, one based on alternative indices similar to the S&P 500 but which weight companies differently. The attraction is potentially higher long term returns with a better risk to reward trade-off in the bargain.

The choices:
ETF Comparison Table
The table below shows some of the characteristics of each ETF and recent performance data, with green cells highlighting the ETF that does best for each element. Though each ETF has the same number of green cells, the really important figures to the investor are ultimately the total return (a combination of dividends and stock price increase) with consideration of the risk. These key factors at the bottom of the table, which come from Morningstar.com, are highlighted in bold text. 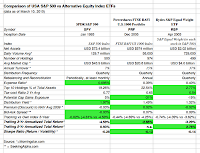 Fundamental Weight and Equal Weight Out-Perform Cap-Weight
The Google Finance chart of SPY, PRF and RSP market price since PRF was launched at the end of 2005 gives a visual confirmation of the comparison table numbers.

Will the Out-Performance Last?
Of course, three years and even five years is a short time to judge investing success and the question is whether the better performance would be sustained in the long term through many economic cycles and conditions.

Some measure of support, though it can never be absolute proof, comes from academic studies. In March 2008, the EDHEC Risk Institute, a body associated with a university in France, published A Comparison of Fundamentally Weighted Indices: Overview and Performance Analysis. The study found that both Fundamental and Equal-Weight indices out-performed the S&P 500 by around 2% per year over the period from 1965 to 2006. The study also found higher Sharpe ratios for the Fundamental index. Finally, the study calculated the Sortino ratio, which considers only the downside return vs risk, and it too showed that the Fundamental index (they did not figure out the Sortino ratio for the Equal Weight index) did much better than the S&P 500. That the recent performance figures follow the same pattern of out-performance, during a subsequent time period of singularly traumatic market stress, is reassuring.

What's are the Risks?
If these alternate indices and associated funds have done so well, what could go wrong and what are the potential downsides?
Alternative Index Funds Traded in Canada
There are no broad US market equal-weight funds available in Canada at the moment.

Fundamental weight - four funds are available based on the same RAFI 1000 index:
1) Claymore Canada offers two ETFs, one of which hedges US vs Canadian dollar currency shifts and the other does not.
2) Powershares FTSE RAFI U.S. Fundamental Index Fund (AIM57203 for Class A, MER 1.44%) - a mutual fund, new since January 2010
3) PRO FTSE RAFI US Index Fund (PRO901 for Class A DSC, MER 1.6%) - another mutual fund, started up in March 2007

Note that the currency factor, whether hedged or not (see previous post discussing this issue), and higher MERs will greatly affect net returns for the Canadian investor.

Alternative index schemes are an intriguing investment possibility that have attracted much discussion and criticism, as well as quite a bit of investment money (see net assets of RSP and PRF in the above comparison table). For the online DIY investor, as usual, whether to buy in is a decision you must make for yourself. Or, you can always seek professional guidance.

Disclaimer: this post is my opinion only and should not be construed as investment advice. Readers should be aware that the above comparisons are not an investment recommendation. They rest on other sources, whose accuracy is not guaranteed and the article may not interpret such results correctly. Do your homework before making any decisions and consider consulting a professional advisor.
Posted by CanadianInvestor at 08:40