The S&P 500 Index is a well-known and widely-reported indicator of the state of the equity market in the USA. The index comprises the 500 largest and most actively traded companies in the USA. The 500 companies are deliberately chosen to represent all sectors of the economy and they make up about 80% of the total market value of all US equities.

A Canadian investor has several good reasons to invest in the US equity market and in the S&P 500:
ETFs provide a very convenient and cost effective way to invest in the S&P 500, with both US-traded and TSX-traded versions being available online through discount brokers. There are also similar indices and ETFs other than those that track the S&P 500, providing the investor a wide choice. All the ETFs below share the feature of passively tracking US large cap stocks (i.e. merely mimicking the market and not trying to outperform in any way or by any means) that make up the bulk of the equity market.

S&P 500 Trackers
Other Large Cap Funds - these three funds include 250 or so more companies, which has two effects:
1) lowers the size of the companies held from about $43 billion average market cap to $37 billion
2) slightly reduces the concentration of holdings from over 19% made up by the top ten holdings to 18%.
Canadian-Traded ETFs - both these funds attempt to remove the effect of currency swings between the Canadian and US dollars through hedging and to provide the performance of US equities to Canadian investors Comparison Tables 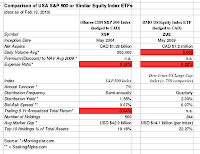 Which ETFs are the Winners?
It is hard to pick a best fund since several are so similar. SPY, IVV, VV are all excellent funds with very low costs (Expense Ratio, Bid/Ask spread, Premium/Discount to NAV) and close tracking of their index (see image of Google Finance chart below - it is hard to tell the lines apart from each other and from the S&P 500 index itself).

SCHX appears to be heading to join the top group if it continues to attract assets and build trading volumes to lower the bid/ask spread. ELR has a much higher expense ratio and too low trading volumes, shown by the red cells in the table.

The Canadian entrants suffer a lot from the burden of hedging, which seems to lower net returns not only by the expected supplementary direct cost of the hedging but also through much less effective tracking of the index. Larry MacDonald describes the issue in Check the Tracking Error Margin for Currency ETFs on Seeking Alpha. The chronic and seemingly ever-widening gap in the Google Finance chart below between XSP and IVV, the US fund whose performance it attempts to clone, illustrates the problem.

However, currency effects can far outweigh the tracking under-performance so a hedged fund may still make sense (see previous posts The Historical Effect of Inflation and Currency on an Investor's International Portfolio and Foreign Investments: to Hedge or Not to Hedge Currency). Canadian investors may thus still want to buy XSP or ZUE.

Disclaimer: this post is my opinion only and should not be construed as investment advice. Readers should be aware that the above comparisons are not an investment recommendation. They rest on other sources, whose accuracy is not guaranteed and the article may not interpret such results correctly. Do your homework before making any decisions and consider consulting a professional advisor.
Posted by CanadianInvestor at 07:23