Stocks that Analysts Love, and a Few that They Hate

The end of a year and the beginning of another always brings out articles about trends for the coming year and favorite stocks that are believed to be primed for success. This time around has been no exception and we can peruse such articles in the mainstream press on the Globe and Mail site, the Financial Post, Yahoo!Finance, Morningstar.ca and even on chat forums such as Financial Webring's 2012 and 2013 threads. Inspired by the idea, we decided to cast a wider net and check all the stocks in the TSX Composite Index to see which are universally loved i.e. rated a Strong Buy, and which are hated, the ones with Sell ratings.

Finding the ratings
As clients of online brokerages, we now usually, at least among the best of the brokerages, have at our disposal two main kinds of analyst ratings. First, there are those of the human analysts working at investment bankers. Then there are various automated tools that filter and rate stocks using mainly accounting data but often including some price momentum data.

In addition, we all can use for free the TMX Money site maintained by the TMX Group that runs the Toronto Stock Exchange. Pulling up a quote for a company reveals several tabs, one of which is titled Research, e.g. this one for Royal Bank of Canada (TSX: RY). The tab shows the range of investment banker Analyst ratings, anywhere between Strong Buy and Strong Sell, and it also gives a overall combined average between 1.0 at the top Buy end to 5.0 at the lowest Sell end. There is unfortunately not a stock filter choice that can extract a list of Strong Buy/Sell stocks, so we have laboriously, for the benefit of us all, looked up the 250 TSX Composite stocks one at a time and compiled a list of the Analyst ratings. We found that the vast bulk of stocks are rated somewhere between mild Buy and Hold. We ignore these stocks today.

Stocks the human analysts love
At the top of the list are the companies that have an overall combined Strong Buy rating. No less than 41 stocks currently have a composite average Strong Buy score of 1.5 or less according to TMX Money. However, when we used two automated ratings reports available on BMO Investorline - the Value Analyzer from Recognia and the Ford Equity Research Report - the results were surprising. In most cases the automated rating diverged sharply from those of the human analysts, as can be seen in our comparison tables below. Human analysts and automated ratings tools often disagree! For only a minority of ten companies did the stock rating agree or not actually disagree. And only for two companies - Goldcorp Inc (TSX: G) and Intact Financial (IFC) - did all three sources agree and point to BUY! 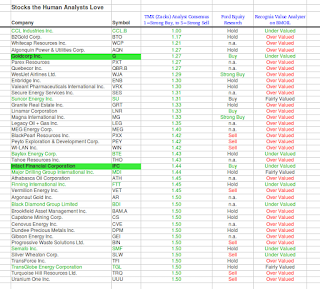 Stocks the human analysts hate (i.e. condemn with faint praise)
At the other end of the spectrum, there are far fewer stocks, only 11 in total, that receive from human analysts any kind of overall Sell rating, which we have set at a score below the mid-range 3.0 of the Hold category. Human analysts give Sell ratings far less than the automated reports! The absolute worst rating of any stock is Atlantic Power Corp's (ATP) 3.71, which places it as a Moderate Sell in the TMX schema. Surprisingly, since the automated reports appear to be "harder markers", in two cases - Bank of Montreal (BMO) and National Bank (NA) - the human analysts are pessimistic while the automated reports indicate the very opposite, a Buy situation! To compound our shock, we note that these two stocks were amongst the good looking Buys in our recent post that took a closer look into Low EPS Dispersion Stocks. Westport Innovations (WPT) has the dubious distinction of being the only company with across the board negative opinion.

Making effective use of the ratings
As we noted before in this post, it is best to take analysts forecasts and assessments with a large grain of salt. There is undoubtedly too much optimism in most of the forecasts. Some will be correct and most will be wrong. However, we need to remind ourselves that even when the consensus is negative as it is with Westport, there is someone with a positive view (one analyst has a Strong Buy rating on the stock). Or, conversely, for a stock rated strongly positive, there is someone with a much less sanguine view (e.g. a Hold rating).

In all cases it is all about future prospects. Human analysts tend to forecast change in the future while the automated reports basically extrapolate the past. Which will be correct? By looking at fundamental ratios such price/earnings, return on equity, profit and dividend growth, debt ratios and so on, the ratings can point us to key issues about each stock. If results have been bad but there is a Strong Buy rating, such as for Wi-Lan (WIN), obviously Analysts expect a turn-around so we should look to assess how likely or believable that story is. If results have been good but there is a Sell rating, as for BMO and National Bank, then the Analyst expectation is for a slowdown or decline so we should focus on that as a key issue.

Disclaimer: this post is my opinion only and should not be construed as investment advice. Readers should be aware that the above comparisons are not an investment recommendation. They rest on other sources, whose accuracy is not guaranteed and the article may not interpret such results correctly. Do your homework before making any decisions and consider consulting a professional advisor.
Posted by CanadianInvestor at 12:35

When picking stocks most investors go for some of the most well known names while not a bad idea most of the large successful companies we once small unknown companies. I guess the old saying money talks applies to stocks as well as to everything else the more money you have or the bigger your company the more attention you draw.