Investors might be forgiven for thinking that countries doing well economically, whose businesses are necessarily thriving, should also see strongly rising stock markets and therefore that is where they should direct their investments. It turns out in fact to be the other way round - those countries which have been experiencing currency weakness i.e. a currency declining against most others, tend to do better in the future.

The findings come from three London Business School professors Elroy Dimson, Paul Marsh and Mike Staunton in the Credit Suisse Global Investment Returns Yearbook 2012. Probably it's that weak currency allows exporting companies to sell more or to attain higher profit margins, with subsequent profitability and stock prices; the professors don't say with certainty. But they do say quite confidently based on up to 112 years of data (depending on the country) for 83 countries that "... equities in particular perform best after periods of currency weakness". The effect is quite pronounced (especially since 1972 when the modern era of floating exchange rates began), as can be seen in the image below copied from the document, where the much taller dark bars show the stock market outperformance in the countries with weakest currencies. The effect is also stronger after 5 years of weakness than only one year. 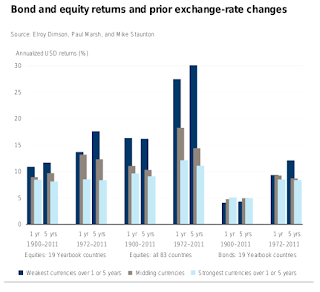 Which countries now have had extended weak currencies?
To explore the possibility of using this phenomenon for investing, we first need to find countries whose currencies have been depreciating. To do this we turn to the RatesFX website, whose Visualizations allow us to see in a glance when a currency has been depreciating against major world currencies. We copied one of the charts for one such depreciating currency country, India. Notice how the 3-years tab we selected is all bright red - the maximum end of the depreciation scale. 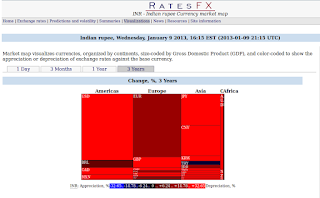 Unfortunately, RatesFX does not cover every country's currency, one notable absence being Russia, but the 30 currencies comprise most major economies. It is easy and quick to click through the 30 countries and look for the bright red pattern of currency weakness. Here are the 8 countries/currencies that have experienced broad weakness over the past 3 years: the Euro i.e. most but not all European countries; India; Brazil; Indonesia; Poland; South Africa; Turkey and; Denmark. The Canadian dollar and the US dollar, incidentally, are in the middle, with a mix of mostly mild appreciation or depreciation. Some countries whose currencies have been appreciating include China, Australia, Taiwan, Chile, Switzerland, Singapore, Thailand and Malaysia.

A feasible investing approach using ETFs
Selecting individual stocks across such a wide range of countries would be unwieldy and impractical for the individual investor. However, ETFs traded in Canada and the USA offer the Canadian online investor a good choice of securities to focus on these countries. Such ETFs hold a basket of stocks, usually the local country index of each individual country, at a reasonable expense ratio. To find the Canadian-traded ETFs, we used several of the screeners reviewed in our ETF Screeners Compared post in September. The easiest one to use for finding the US-traded ETFs is ETFdb, which has a tool to display a list of individual countries. Here are the results:

1) The Euro area
Most European ETFs include the UK, a non-Euro country so we avoid them to select strictly ETFs that cover the whole Euro area. There are also individual country ETFs for each major Euro country but we also avoid them to keep things simpler.
We find it interesting that our recent post, coming at the issue from a fundamental valuation perspective, found attractive valuation of European equities. The post briefly compared some European ETFs, including FEZ.
2) India

3) Brazil
4) Indonesia
5) Poland
6) South Africa
7) Turkey
8) Denmark
Balancing the risk in a portfolio
Keeping firmly in mind that the researchers' results apply to the average of many countries over many years, it is wise to spread the odds over all the countries and buy an ETF for each one above. Some will not pay off, while hopefully the winners will more than compensate. We should expect the payoff to come gradually over the course of several years. Dimson et al saw strong returns for up to ten years after the weakness.

A second measure to keep risk within reasonable bounds is to limit the total invested on this basis within a small proportion of our total portfolio, perhaps 10% or less. The allocation could, for instance, come out of the overall allocation to foreign developed or emerging market equities.

A third risk limiter is to review the situation regularly, at least once a year. This active investment strategy would best suit investors who watch their portfolio constantly.  Currencies can shift rapidly and so can markets. Sometimes, extremely rapidly depreciating currency is a sign a country is going down the tubes and the stock market is headed for total wipe out.

Selling the ETFs of countries with strong stock market gains and suddenly appreciating currencies, which will show up in our investment portfolio as a double whammy gain (see our post on the Historical Effect of Currency and Inflation on a Canadian Investor's International Portfolio), and buying those of the new weak ones, keeps the tactic everfresh.

Disclaimer: this post is my opinion only and should not be construed as investment advice. Readers should be aware that the above comparisons are not an investment recommendation. They rest on other sources, whose accuracy is not guaranteed and the article may not interpret such results correctly. Do your homework before making any decisions and consider consulting a professional advisor.
Posted by CanadianInvestor at 16:07