Last week we threw some mud at companies that paid their CEOs handsomely while investors suffered. This week we look at the good side of the ledger for investors, where CEO and top executive pay may have increased but investors did as well or better. We also look back at our similar 2012 list of companies where pay and stock returns aligned well.

Stocks where the investor reward came first
The data covers up to 2012 only since the original source is the Management Proxy Circular that companies must file with regulators and give to shareholders before every annual meeting. 2013 pay data will start to become available as companies file their reports covering 2013 on Sedar. We copied much data from the report  All in a Day's Work? (CEO Pay in Canada) by the Canadian Centre for Policy Alternatives' Hugh Mackenzie since he has done all the laborious grunt work of compiling the pay numbers of the 100 best-paid CEOs. However we also decided to widen the search for good companies to all those in the TSX Composite by looking at the Globe and Mail's Report on Business 2013 Board Games table. In particular the table shows 5-year total returns. We picked out the stocks with the highest returns to see which gave the most investor return "bang" for the CEO pay "buck". Finally, we did our own rooting through Sedar.com to find companies where the pay of the top company executives (called Named Executive Officers or NEOs in the Sedar reports), not just that of the CEO, rose less quickly than the total stock return from 2007 to 2012. 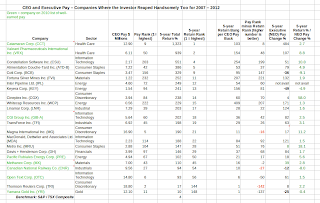 One of the companies in the above list that illustrates what we are looking for is Cineplex. Its Proxy Circular includes the following graph of stock returns rising much faster than executive pay. Four companies, Cott, Keyera, Canadian National Railway and Yamana Gold, managed to achieve a more extreme outcome - excellent stock returns while executive pay declined over the five years. 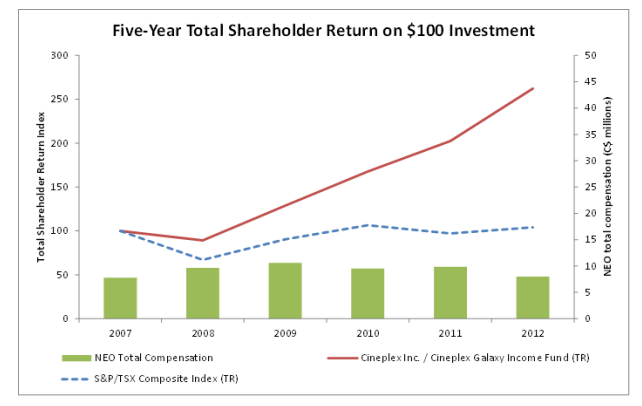 Our list of twenty-three stocks that rewarded investors more than CEOs or executives is not exhaustive. But the margin of reward vs pay was getting slimmer as we worked our way down the list of stocks. Note how Thomson Reuters 5-year stock return at 17% barely exceeded the 8% rise in total executive pay over the period. Thomson is also much higher up the relative pay scale in 2nd spot than the returns scale in 114th spot.

Some idea of other stocks that have achieved a reasonable relationship between shareholder return and executive compensation, based on 3-year data instead of our five years, comes from the following chart in the 2013 Magna proxy circular. The best place for a company to be is to the right of and below the middle diagonal line. Some caution is still necessary. For instance, Eldorado looks ok on the chart, being smack in the middle on the line. However, on a 5-year basis executive pay rose an astounding 1193% while the stock only gained 10%. 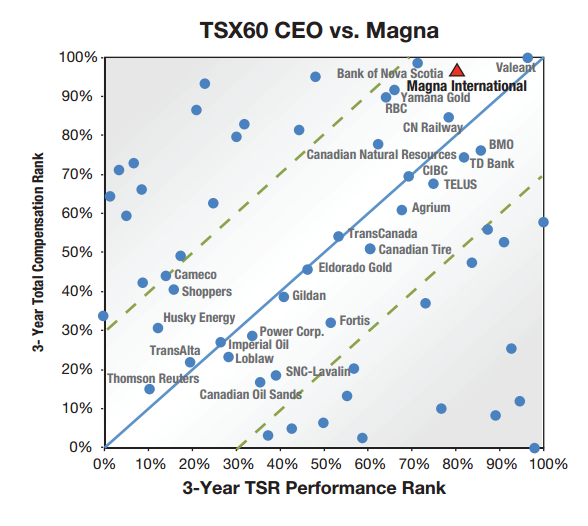 The fate of the good companies in our 2012 post - some are still so, others have gone bad
Eight companies have reappeared - shown in green - from our 2012 post of the good guys at that time. Catamaran, Valeant, CGI Group, Pacific Rubiales, Methanex and Open Text have given their executives what look in some cases like lavish pay increases but investor returns have been even higher. Canadian National Railway and Yamana on the other hand have seen their executive pay decline while stock returns have still surpassed the benchmark TSX Composite's modest 4% total gain.

As before, a favourable balance between CEO and executive pay and shareholder reward is a worthwhile but partial indicator of a company that is well managed by the Board of Directors. Repeat appearances on the good guys list reinforce the notion that a company has a durable good culture in place.

Disclaimer: This post is my opinion only and should not be construed as investment advice. Readers should be aware that the above comparisons are not an investment recommendation. They rest on other sources, whose accuracy is not guaranteed and the article may not interpret such results correctly. Do your homework before making any decisions and consider consulting a professional advisor.
Posted by CanadianInvestor at 10:26