The ETF market in Canada took another step towards greater competition this month with RBC's launch of five new equity dividend-oriented ETFs, covering Canada, the USA (a US dollar version and a Canadian dollar hedged version) and developed countries (EAFE in both a US dollar and Canadian dollar hedged version).  Today we'll compare the ETF for Canadian equities, the RBC Quant Canadian Dividend Leaders ETF (TSX: RCD), which started trading January 15, 2014, with its competitors. We'll also see how these ETFs are faring against each other and the broader Toronto Stock Exchange.

Our comparison table below shows the numbers that lead us to say that RBC's new ETF has:
The other Canadian dividend ETFs 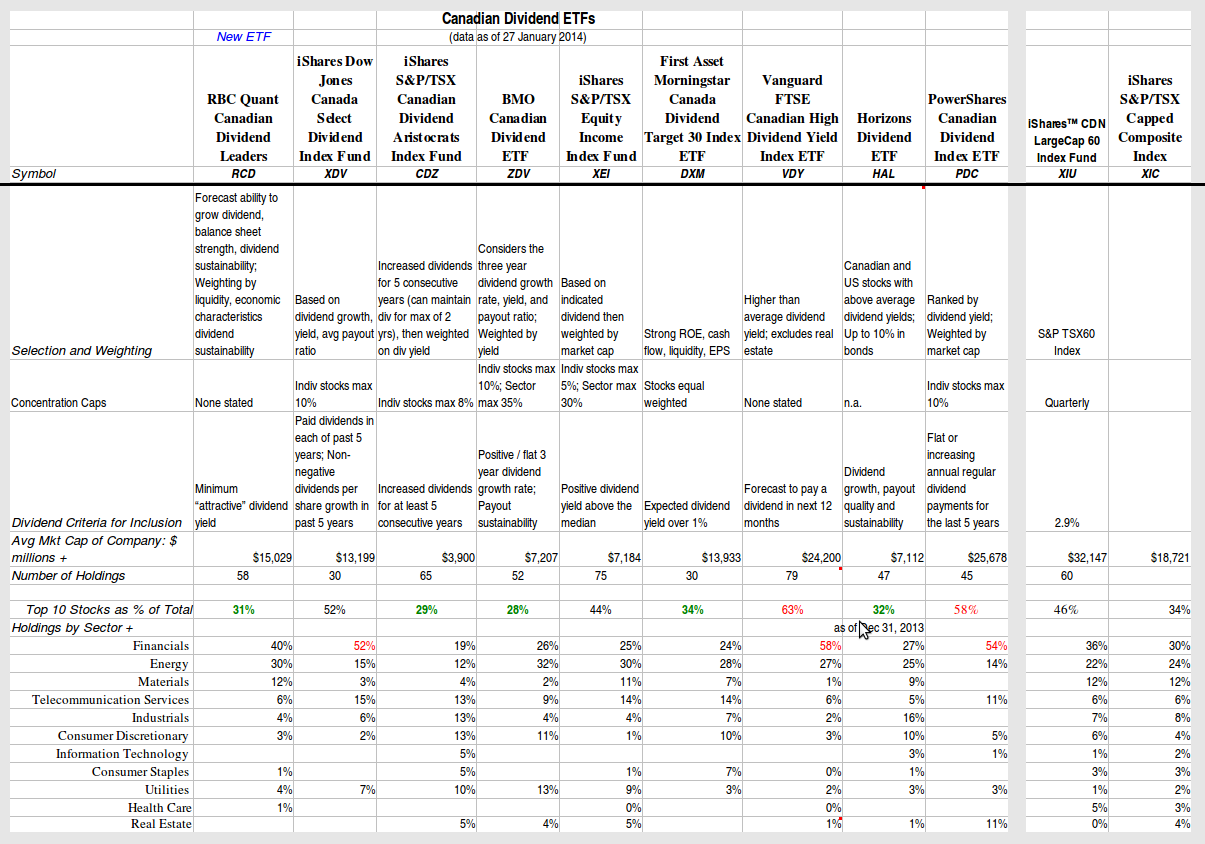 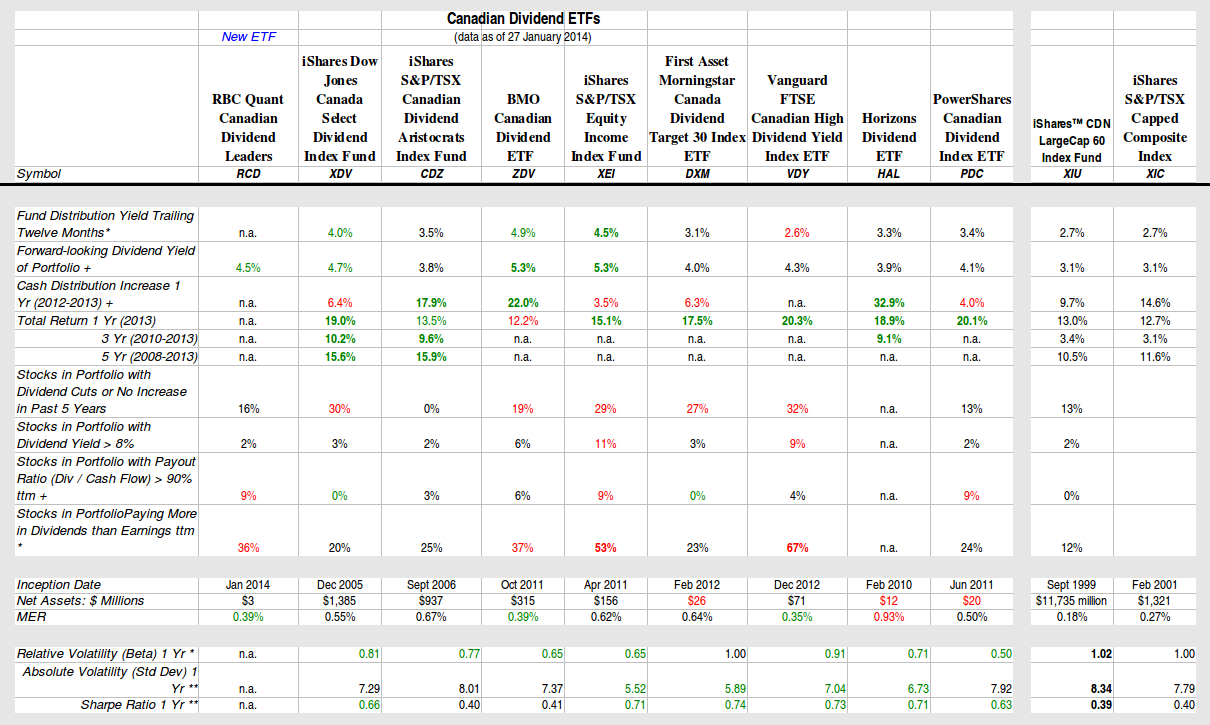 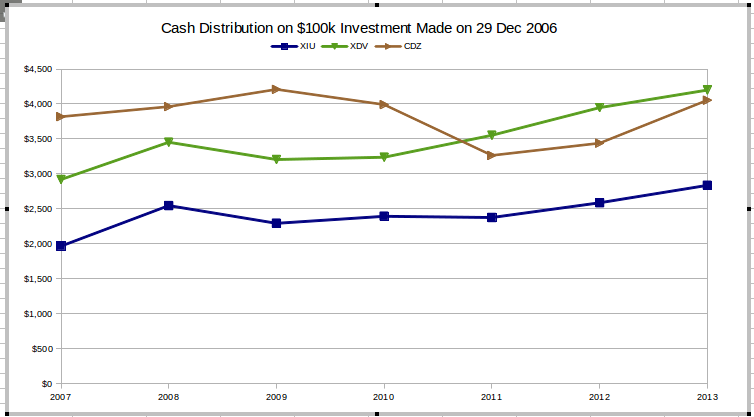 Which Dividend ETF is best?
We still don't like HAL much for its high MER, lack of visibility (it doesn't publish its full holdings) and lower distribution rate, nor VDY which looks more like a value-oriented capital appreciation fund. It's hard to pick amongst the rest - good points of each one are offset by some weak points. ZDV would still be a slightly preferred option for those whose purpose in looking to this kind of ETF is to obtain high steady income. It had the highest trailing distribution yield, the tied highest forward looking distribution yield and the second highest increase in distributions in 2013. CDZ is an alternative for a mainstream type equity holding with a slightly higher dividend and perhaps/probably/hopefully better long term returns but the same risk characteristics as the overall market.

Disclaimer: This post is my opinion only and should not be construed as investment advice. Readers should be aware that the above comparisons are not an investment recommendation. They rest on other sources, whose accuracy is not guaranteed and the article may not interpret such results correctly. Do your homework before making any decisions and consider consulting a professional advisor.
Posted by CanadianInvestor at 20:06

Thanks for your article. What's your view on the new Dividend ETF from Purpose (i.e.: PDF.TO) ? It's not a pure Canadian Dividend ETF as it has about 70% canadiand and 30% US companies.

Hi Anon,
PDF looks ok and comparable to the pure Canadian ETFs for Canadian holdings. Its holdings overlap to a high degree and its expense ratio is reasonable at 0.55%. There is a measure of USD currency exposure inherent in it - as CAD goes down, return gets boosted and the other way round if CAD rises. PDF does offer the advantage of not having to trade currency, and pay the conversion fees of 1+%, to buy US stocks.

Tax is a bit more involved. The tax-efficient corporate structure, which turns US dividends, normally ordinary income, into cap gains instead for Canadian taxes is good in taxable accounts but then the tax credit on the 15% withholding taxes paid on US dividends is lost (e.g. 15% of 4% div = 0.6% lost). If your ord income tax rate is 40%, you would pay 40% x 4% div = 1.6%, while the cap gains rate would be half = 0.8%, plus the lost withholding tax of 0.6% would total 1.4%. PDF would thus be a little bit better tax-wise than holding US stocks or US ETFs of US stocks in a taxable account.

Maybe it's time for a post looking at US dividend ETF alternatives!

Not sure how you end up picking CDZ. If you look into the methodology you'll find it picks stocks basically for yield and ends up stocks like AGF being the top position. Performance wise it has lagged - 8.1% over the past year ending Jan 2014 where the group average was over 11%. The only ETF with solid performance that didn't achieve it by being heavily weighted toward financials was DXM.

Anon, re CDZ the reason I found it attractive relates to the wide spread among sectors, the low overall concentration in any one stocks, the apparent quality of holdings (few stocks with ultra-high yields / payout ratios / dividends greater than earnings and of course no dividend cuts). Yes the 1 yr performance lags the others and the XIU benchmark but we cannot expect it always to outperform. The 5yr performance number looks solid. btw, CDZ weights for yield but picks stocks for dividend increases. AGF is held by four other dividend ETFs (XDV, ZDV, XEI, VDY) but it has not increased its dividend for 2 years so it is at the boundary of CDZ's maximum two years without an increase rule - it may soon be dropped.