At the end of last week the Canadian ETF providers were announcing the expected reinvested distributions on their ETFs for 2014. This year, there seem to be a lot of very high amounts, which could cause large unexpected income tax bills for investors holding the affected ETFs in taxable accounts. (This does not affect ETFs inside tax-free or -deferred accounts like a TFSA, RRSP, RESP, RRIF, LIRA etc.)

Reinvested distributions - John Heinzl of the Globe and Mail earlier this year described them as a phantom menace. You don't see the cash but if held in a taxable account they will be included on T3 slips in your income and you are therefore liable to pay tax. We also wrote about this back in 2008 in The Mystery of Fund Capital Gains Explained, when gains had to be reported despite the market having dropped enormously that year.

Most of the distributions arise from capital gains realized internally by the ETFs when they trade stocks to follow their index, though sometimes the CAD-hedging activities of hedged funds can cause it too. It's not something that we investors can control or foresee. Nor is the presence of high reinvested distributions inherent to certain ETFs, or a mark of poor management by the ETF manager. No one's to blame but it can still hurt.

ETFs with High Reinvested Distributions in 2014 - The final official figures will only be available in early 2015, which means some ETFs below will not come in exactly as shown. But by then it will be too late to do anything.

iShares - The December 18th press release from manager BlackRock with the figures for all their Canadian ETFs is here. Expressing the distribution as a percent of each ETF's current Net Asset Value per share tells us the relative impact of the amount. The three highest are:
There is a raft of other iShares ETFs whose reinvested distributions exceed 3.0% of NAV - TSX trading symbols XCV, CUD, XEI, CIF, CSD, XEF, XEH, XHD, XMU and XMV. 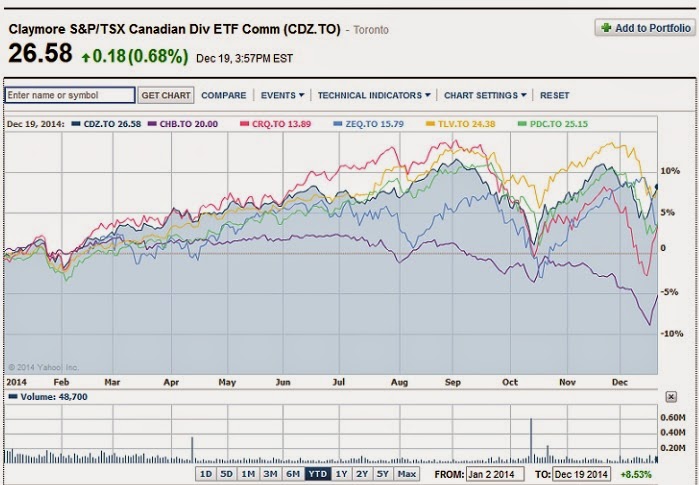 To alleviate a potential cash flow problem for the investor to come up with the tax owing, First Asset has announced that it is paying out 25% of the special year end distribution on its ETFs in cash.

To avoid, trade before 1pm close of market December 24th - Shareholders of record as of December 30th or 31st, depending on the provider, will be liable. To avoid being a shareholder of record for both these dates, taking account of holidays, it is necessary to have sold a position in the ETFs before the TSX closes on December 24th.

Substitute a similar ETF - The way to stay invested in an intended portfolio allocation, after selling the offending ETF, is to buy a similar ETF, but not one that is identical, to avoid problems with the Canada Revenue Agency superficial loss tax rule that invalidates claims when buying the same property back within 30 days (see TaxTips explanation).

Examples:
Beware buying in till after December 24th - Anyone buying these ETFs today and holding past December 24th will incur a large gain to report. Though the reinvested distribution amount can and should be added to the Adjusted Cost Base of the investment, which reduces future capital gains to report upon eventual sale, the requirement to report the gain on the 2014 tax return means paying tax in advance before the investor realizes any gain. Needless to say, if you presently have no position in the high reinvested distribution ETFs, but want to buy in, wait till after December 24th to do so, in order to not be tagged with the tax liability.

Merry Christmas to all blog readers!

Disclaimer: This post is my opinion only and should not be construed as investment advice. Readers should be aware that the above comparisons are not an investment recommendation. They rest on other sources, whose accuracy is not guaranteed and the article may not interpret such results correctly. Do your homework before making any decisions and consider consulting a professional advisor.
Posted by CanadianInvestor at 21:39