Which Large Cap TSX Stocks are Most Dangerous or Most Attractive? - Use Short Interest with Volatility

Unlike stock analysts or media pundits (bloggers included!) who only take a hit to their credibility when their stock recommendations go wrong, short sellers (see short sale definition on Investopedia) have their money where their mouth is. And perhaps due to that fact, short sellers are often right (that doesn't mean they always make money, it's a win-big, lose-big stock market trading strategy).

The recently published The Long and Short of the Vol Anomaly by Bradford Jordan and Timothy Riley (free download on SSRN) studied the inter-action of stock price volatility and the amount of short interest on stocks in the USA from 1991 to 2012. The authors discovered the intriguing relationship that though low volatility stocks outperformed the market and high volatility stocks on average, if the high vol stocks are subdivided into those the short sellers are leaving alone from those they are attacking, there is a huge and consistent gap in performance. This graph from their study shows the enormous difference in long term performance. 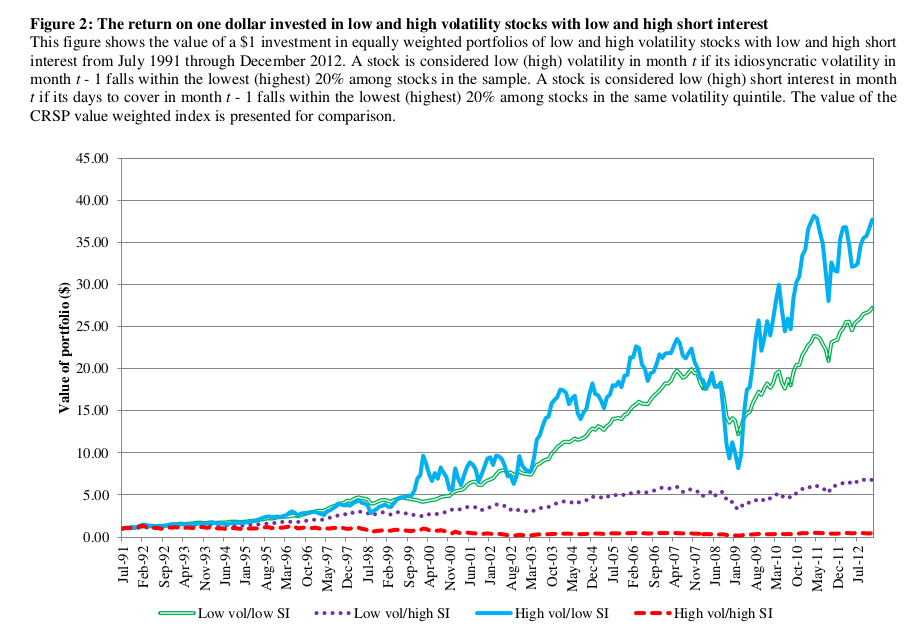 Those results look intriguing. We decided to to apply the idea to the large cap ($2 billion plus market cap) TSX stocks.

Finding the Short Interest and Volatility of TSX Stocks
TMX Money seems to offer the only free stock screener to find stocks with our desired combination of beta / volatility and short interest.

The Short Interest Ratio (see Wikipedia definition) is the number of shares sold short currently outstanding divided by the average daily share trading volume averaged over the past 30 trading days.

Note that lists like the Financial Post's Largest Short Positions show the companies with the most shorts sold shares outstanding but when the large companies like the banks with huge numbers of shares on the market are on the list, it is not necessarily indicative of large market price risk, especially as the authors found that the huge gains or losses were associated with very volatile stocks, which our Canadian banks are not. For instance, TD Bank currently has a very large short position plus a high short interest ratio of about 20.4x but its beta is only 0.81, well below the TSX market average of 1. Though many short sellers are expecting TD to go down (making us think that those who would want to buy TD likely won't lose out by waiting), TD doesn't make our list below of high risk & high potential reward / loss due to its low beta.

The screen capture image below shows how to filter in TMX Money based on short interest, though we could also start filtering with the beta, which is under the Trading and Volume criteria drop down menu. We found by trial and error that a beta of over 2 (i.e. twice as volatile as the TSX overall) was sufficient to bring up a small list of stocks, most of which are highly shorted but a few of which are very lightly shorted. 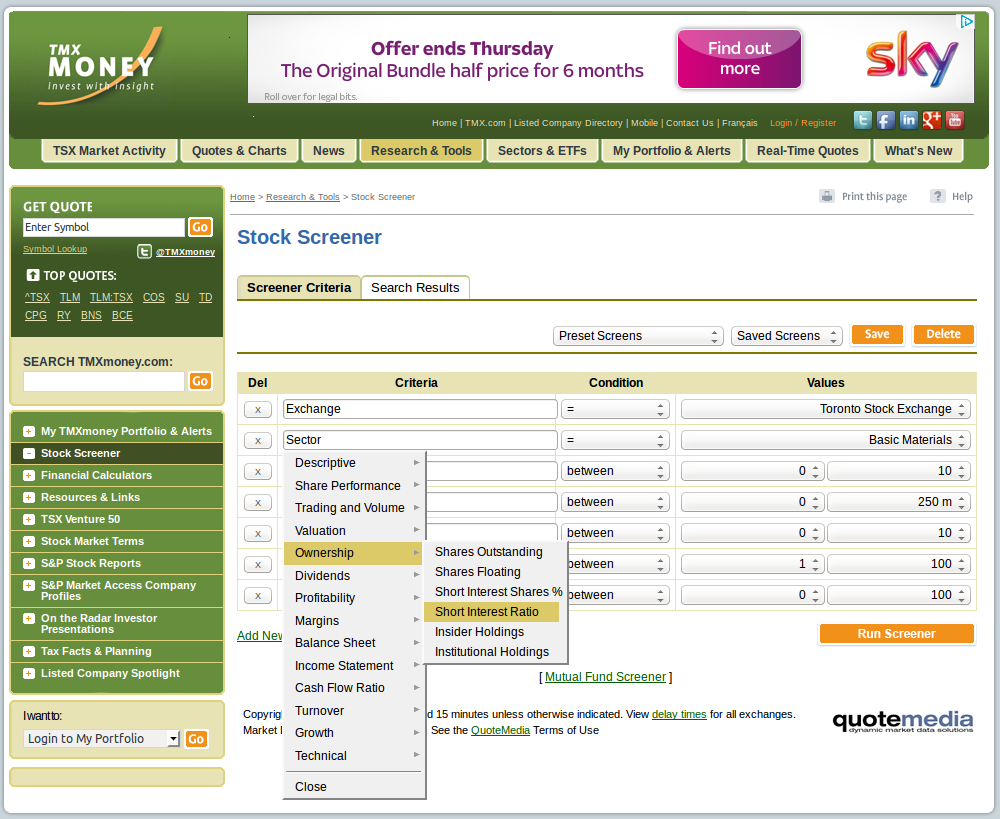 Once the filter is applied the results do not automatically show the short interest and the beta - it is necessary to click on Edit Columns then View More Selections to select the Short Interest Ratio and 60 Mth Beta columns for display. TMX provides beta for computed over the past 60 months only (unfortunately, the 36 Mth Beta doesn't bring up anything), so we cross checked with the 36 month trailing beta from GlobeInvestor's WatchList tool by entering the stocks into a new portfolio.

The Stocks
Our comparison table below shows what we found, colour coded to match the graph from Jordan and Riley - red the dangerous highly volatile and highly shorted, blue the potentially very attractive highly volatile but lightly shorted and green the safest least volatile - least shorted combination. For added interest we've thrown in data on the Analyst recommendations and Analyst EPS dispersion, along with which of these stocks happen to be held by some popular ETFs. 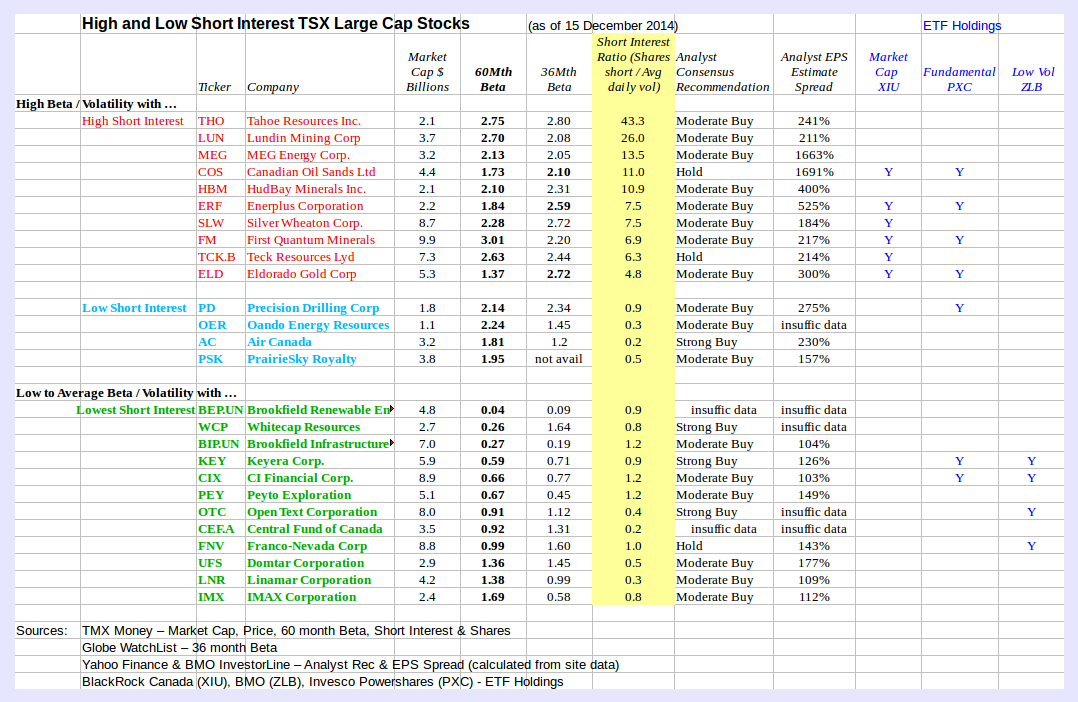 The dangerous highly volatile and highly shorted - Little surprise, every one of these companies is either from the energy or the materials sectors, which have been taking the brunt of recent market declines. All of them also display a high dispersion between high and low Analyst EPS estimates, which we have found to be a characteristic of stocks with more downside than upside potential. This blogger won't be buying any Tahoe Resources, Lundin Mining or MEG Energy in the near future, no matter what Analyst recommends them as a Buy!

Surprise! There are energy and materials companies amongst our dozen safe-looking least volatile - least shorted stocks - For example:
No surprise, the safe-group stocks' EPS dispersion numbers mostly fall within the lowest or middle riskiness category of that measure.

Short Sellers do NOT at all have the same opinions about the stocks as the Analyst consensus - to say the least! None of the red group is rated a Sell by Analysts, two are Holds and most - 8 of 12 - are Moderate Buys. Who would you rather believe, those who have their money at stake, or who will suffer only a dent in their reputation? As we wrote back in 2010, take Analyst recommendations with a large grain of salt. Now we can add, the short sellers are that grain of salt.

ETF holdings differ dramatically - The benchmark market cap ETF from iShares, the S&P / TSX 60 Index fund (TSX: XIU) has a bunch of the short-sellers' targets but none of the stocks in the least-risky list. Meantime, BMO's Low Volatility Canadian Equity ETF (TSX: ZLB) has none of the short sellers' favorites and several of the least-risky group. The fundamentally weighted PowerShares FTSE RAFI Canadian Fundamental Index ETF (TSX: PXC) is a mix of the two. There are plenty of other stocks in these ETFs so performance will not be determined only by what happens to the 10% or so of the holdings which appear in our lists of this post. But look at the price performance of the three ETFs over the last six months in this Google Finance chart. XIU and PXC are down considerably, while ZLB is up! 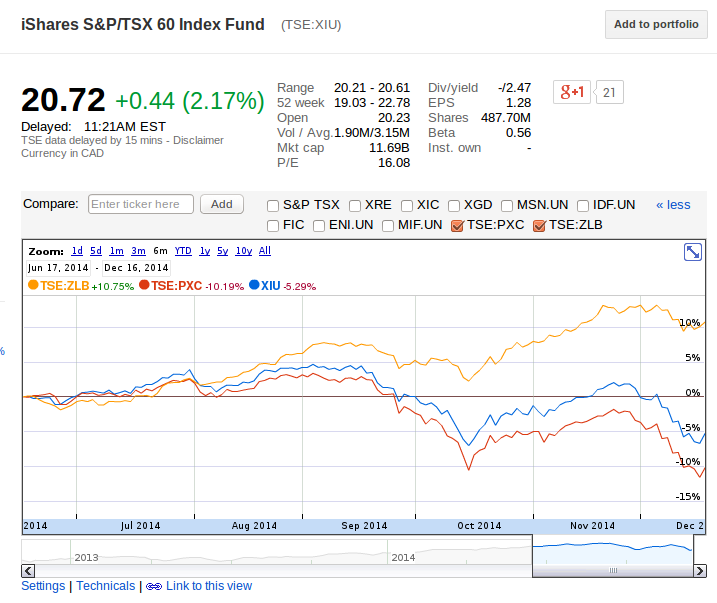 More investigation is required before buying any individual stock - No doubt some of the stocks in the respective groups will do as the research suggests - gangbusters up or down. The short seller signal is not a certainty for each and every stock. Some will do the opposite of the overall pattern. The research took baskets of stocks - much larger than the groups above - and averaged their performance, in addition to doing so over years. It's a statistical result that looks to be quite robust based on all the tests and checks the authors performed but common sense should warn us that it won't work in every case.

As it happens, the Globe and Mail recently published the article Ten oil patch stocks that can weather the downdraft, which contains Canadian Oils Sands (TSX: COS), one of our red danger stocks. The article presents some data to support a positive assessment of COS. Maybe the short sellers are wrong and it could be a good buy after all. But the short selling interest data we have presented is, we believe, a useful element to the analysis of the company.

Disclaimer: This post is my opinion only and should not be construed as investment advice. Readers should be aware that the above comparisons are not an investment recommendation. They rest on other sources, whose accuracy is not guaranteed and the article may not interpret such results correctly. Do your homework before making any decisions and consider consulting a professional advisor.
Posted by CanadianInvestor at 07:00